Developing film is usually an involved, but not very creative process. Yes, you can do weird things (like developing your film in coffee), but most people mix a developer (in my case Rodinal) to a specific dilution, put the film and developer in a tank, and agitate it every minute or so until you reach the time that the Massive Dev Chart tells you.

The only problem with this is that it requires your attention for anywhere from 5 minutes to half an hour, and, in my opinion, it’s not a very interesting process. That’s one of the reasons I decided to try semi-stand development.

Semi-stand is a process whereby, rather than agitating regularly for the development time, you instead leave the tank to stand for the whole time, with only a small agitation at the halfway mark. Of course, you could avoid this agitation altogether (this is called stand development), but you risk uneven development. I’ve used this process on two rolls of HP5+ so far, and both times have been happy with the results. While I have noticed some changes in the quality of the resulting images, I’m unsure whether this is down to the stand development, or merely imagined. After all, it’s very hard to distinguish differences due to development process in two different images. Having said that, I do think I’ve observed a much nicer quality to the grain in these photographs.

The best thing to me about this process, however, is the fact that it frees me up to do other things while developing! Once I started developing a lot of film, I found that, although I love the results, I didn’t enjoy standing for half an hour, watching a development tank. With this process, I can go away and read a book for an hour while my film develops!

I’m unsure whether I’ll keep using semi-stand development as my ‘standard’ process, as I have noticed some inconsistencies in the results, but it’s definitely a useful process to know, and a handy one for the lazy (or busy) photographer!

A while ago I bought myself a Holga with the intention of converting it to a pinhole camera. A few months and two lost test rolls later and I’ve tweaked it to the point where I’m happy with my results!

The soft focus brings to mind Hiroshi Sugimoto’s series ‘Architecture’, with its barely-defined structures and almost timeless glow. Here, the sculpture’s hard lines are worn down by the imprecision of the pinhole camera, but its deliberate form is striking nonetheless. The boundary between the land (both the sculpture and the hedges behind it) and the sky is also blurred, the whole scene having a haze that is the hallmark of the pinhole camera.

I enjoy the simplicity of this form of photography. There is no aperture manipulation, no focusing, and shutter speeds are counted in minutes, not fractions of a second. With the camera set up I simply meter, open the shutter, time the exposure, and close it again. It is far from the high-tech world of photography today. When shooting like this I am forced to slow down, giving me time to contemplate my surroundings and really experience the environment I’m in.

Another effect of the pinhole camera’s slow shutter speed is that all moving things blur into nothingness. In this photograph, the tree and the snowdrops, moving in the wind, are ghostly and shapeless. Even the church and gravestones, static and unmoving, are blurred, giving this scene a slightly otherworldly look. Some might hate this imperfection, but I love it. It’s a scene the human eye is incapable of seeing.

Pinhole photography has brought me a new way of seeing the world, not sharp and well-defined, as we take for granted, but hazy and uncertain. A world in which things do not seem quite right, both static and restless. Most people see photography as the art of capturing a moment, but this is capturing the passage of time itself.

I love shooting in fog, as I’m sure many photographers do. It is a magical thing, and seems to change everything around us. Everyday scenes become otherworldly when blanketed in an impenetrable mist. I’m always looking for ways to simplify my compositions, and reduce them down to their most basic elements, because I want to emphasise the things that drew me into the scene in the first place. Sometimes this is really quite a difficult task, but shooting in fog seems to do all the work for me!

Here the focal point is, of course, the church, obscured by fog at the back of the frame. The leaves in the foreground, intentionally left out-of-focus, provide a bit of interest, but the eye is inevitably drawn to the shrouded figure towering over the scene. There are faint hints of detail in the stonework of the church, which makes me want to get up close with this picture and really interrogate it. When I photograph a scene I do so because there’s something in it that speaks to me personally, and intrigues me about the elements before me. My intention is to capture that experience in a frame so that I can present it to you, as nature presented it to me in the first place.

In stark contrast to the tranquillity of my last snow image, this one feels busy, the falling snow giving a sense of restlessness. The contrast between dark and light is here again, with the dark sculpted hedges standing against the overcast sky, making them seem imposing. There is depth, unlike the last image, with layers of these hedges stretching to the back of the frame. Scenes like this are difficult, because the falling snow makes it hard to frame a shot, and you risk getting your camera very wet! I think I managed to pull it off though, and I’m glad I made the effort.

I’m aiming for a calendar this year, which means that I need to take at least 13 images (12 months, plus a cover image) that I feel comfortable putting in a print. 13 images might not sound very much for a year’s worth of photography but trust me, it’s harder than it sounds!

This image is definitely going to be on there. Not only does the beautiful snow make it a perfect contender for a January picture, or even a festive-themed December one, but the arrangement of the trees and the minimalist composition makes this one of my favourite images so far. The tones of the snow-covered ground and the overcast sky contrast perfectly with the dark forms of the trees, giving this picture plenty of negative space and making me feel peaceful just looking at it.

The garden is the city-dweller’s landscape. Whether it be a small plot of land behind your house, or a large public garden like those in London and Paris, these green spaces give an atmosphere of relaxation and serenity to an otherwise bustling metropolis. Plenty of photographers have made the garden their subject, from Michael Kenna to Eugene Atget, and I am no different. I like to try and find beauty in everyday places, and nowhere is this easier than in the garden.

Last week I started exploring the Quiet Place, a garden here on campus, at the University of York. It really is a beautiful place, and certainly lives up to its name. The sculpted hedges give endless photographic opportunities, but there were several times when I stopped photographing and just stood, tripod and camera by my side, soaking in the tranquillity of this man-made landscape.

These are just a couple of images I’ve made here – there are plenty more to come. Photography doesn’t have to be about breathtaking vistas or awe-inspiring monuments. I try to avoid these things, and instead focus on capturing the beauty in scenes that people will walk by every day without a second thought.

A very long time ago, I bought a Lubitel 166B. I wanted to experiment with both TLRs and medium-format photography, and I already had a (small) collection of Soviet and Eastern Bloc cameras. It’s not got the style or sophistication of a Rolleiflex, but it’s still a beautiful object and is a joy to use. 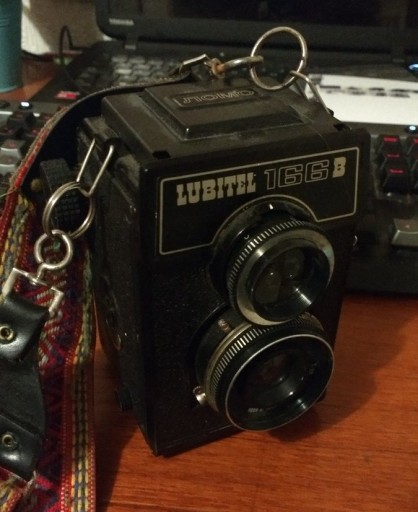 The first time I ever shot on this camera was the first time I went to Cambridgeshire to see Katie’s parents. I was mostly just playing around for fun, but here and there I tried to do some ‘serious’ photography. I had the film lying around for a while, because uni and work had caught up with me and I had never managed to get it into the darkroom, but recently I re-discovered it and sent it to a lab to be developed and scanned.

Whether the light-leaks are due to the camera or the fact that the film had been lying around for so long, I don’t know, but most of the images have at least one splotch of white on them, and some even more than that. This one, of the ceiling in the entrance-way to Peterhouse College, Cambridge, is missing a lot of detail, but that doesn’t stop the pattern from being striking, and I think gives the image character.

Some others have come out a little bit better. This is Peterhouse again, this time from the outside. The image has some fading but I think this works in its favour. The beautiful contrast between the intricate pattern on the roof and the texture of the columns, accentuated by the grain of Ilford FP4+, gives the image an almost painterly quality.

The same goes for this image of a church door in Huntingdon. You can see the beautiful grain on the door, contrasted with the decoration and the stonework above. These images have been edited in Lightroom, of course, but not much.

I’m quite pleased with these images, although I probably shouldn’t leave it a year before getting them developed next time. If I had the time and money I think I’d work more with film. I enjoy the feeling of working with a mechanical camera, especially something like the Lubitel, and I do love the quality and character that you get from film that you really can’t achieve with digital. However, like many, I am limited by material reality, so for now, I’ll have to say goodbye to my archaic Soviet TLR.